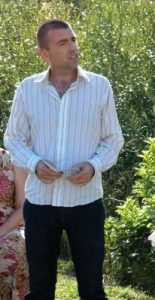 Nathan grew up Presbyterian in South Auckland after coming to New Zealand with his family at age two, attending the same local church until his twenties. He felt the call to become a minister while studying anthropology at Auckland University, but felt a need to step out and see the world first. He took a few years out to work overseas as an English teacher in the UK, Prague and Korea before completing his ministry training in Dunedin and accepting the call to Island Bay Presbyterian in 2006. Nathan enjoys coffee and Kiwi beers, and loves any excuse for a drink and a chat about life and faith.

ce facilitates the work of the congregation in reaching out to the wider community, especially in Berhampore and its social housing communities. Bruce has a PhD (theological ethics) from the University of Otago. While studying, Bruce explored his call to Ministry in the Presbyterian Church and was accepted for training. He completed both his studies and training in 1995 when he began an eight year ministry in the rural context of Malvern Cooperating Parish (Darfield, Central Canterbury). This was followed by 13 years back in Dunedin in Coastal Unity Parish. In 2016 he felt a strong call to work as a Community Minister, half-time, in a new position created here in Wellington by Island Bay Presbyterian. He shifted here with his wife Jan. They have three grown up children located both in Wellington and Dunedin who are all studying in various ways.

The fourth generation of her family to belong to Island Bay Presbyterian Church, Melanie has a strong connection to the Bay and a passion for the community within it.

Coming through the ranks of the IBPC Sunday School, then Youth Group, as well as through Girls’ Brigade from the age of 5, she joined the Parish Council leadership team in 2005. After the birth of her eldest son in 2009, she took on the Children and Families Worker role and is still going strong.

Mel has a passion for kids, dance & theatre, event management, and building community resilience. She sees her role as an opportunity to connect with people and share the love of God.

Mel is married to Devon and has three children. She also works part time for a government department, doing social media and internal comms in the communications team.

Helen is proudly Wellington born and has been with Island Bay Presbyterian since 2013. Her professional life has focused on communications and fundraising largely in the not-for-profit sector. The role at Island Bay Presbyterian keeps her in touch with those roots, and active in the local community – another passion. She has a strong commitment to social justice and has a lasting involvement in fair trade through Trade Aid and her own fair trading enterprise. Playing music, dance, and keeping the local tennis club and physios busy, take up any down time outside raising one awesome child.